Sasha Waltz is one of the best-known choreographers in Germany (along with the late Pina Bausch, who was based in Wuppertal). Waltz founded her company Sasha Waltz & Guests in 1993, together with her professional and life partner Jochen Sandig, and ever since has played an instrumental role in 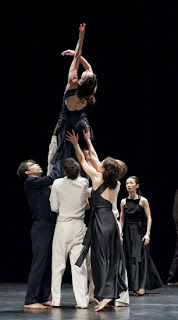 bringing dance into the mainstream of Berlin cultural life, which among other things means moving it from the margins of the off-off to the institutions that have long been supporting Berlin’s astonishingly diverse theater offerings. In 1996 Waltz cofounded the Sophiensaele in Mitte, Berlin’s gallery district, to create a forum for dance and experimental theater projects, and in 1999 accepted the position of co-artistic director (along with Sandig, Thomas Ostermeier and Jens Hillje) of the most important theater in the western part of Berlin, the Schaubühne am Lehninger Platz on the Kurfürstendamm. Although Waltz’s position at the Schaubühne officially ended in 2004, she remains affiliated with the theater, which continues to feature a significant number of dance performances and collaborations between choreographers and theater directors.

Waltz's signature production, Körper (Bodies), which premiered at the Schaubühne in 2000 and was reprised there this August,

was her breakthrough work; in it, she developed a strategy of not just using the bodies of her dancers to show us a dance but making bodies (and corporality itself) the subject of the work. This was the first piece of hers to travel extensively internationally. It established her as one of the leading voices in German choreography.

Sasha Waltz & Guests combines a fixed company (typically consisting of 25 members) with a large number of guest dancers from all over the world who join the troupe for particular productions. In Berlin they perform most frequently at the Schaubühne and at Radialsystem V, a relatively new arts performance space near Ostbahnhof. The group’s international composition becomes apparent whenever Waltz has her dancers open their mouths and add voice to motion, as happens for example in her “dance theater” work Gezeiten—the title means “tides” but also suggests “times”—which premiered at the Schaubühne in 2005. Gezeiten is a beautiful study of singularity and community in troubled times.

The production is divided into two parts: a relatively peaceful first half in which the dancers appear in small groups for an extended 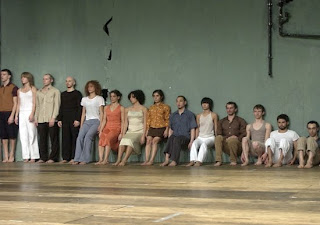 series of pas de deux, pas de trois and pas de quatre; they swirl about and through each other’s bodies, sharing body weight to launch one another aloft and supporting each other in unexpected configurations. Bach’s unaccompanied cello suites alternate with minimalist music composed by Jonathan Bepler. Waltz is concerned with presence defined simultaneously as physical and spiritual, and the tableau of dancers hurling themselves repeatedly onto each other’s bodies seems to be making as much a psychological as an aesthetic statement. She offers allegories of community as well, with dancers walking (in silence) in perfect lines, like human caterpillars, or running to sit upon each other’s knees to build large body sculptures. They twirl red chairs

around like giant semaphore signals. She even has all her dancers line up against the back wall, moving their bodies up and down to sketch out graphs of ascending and descending lines. As a culmination of this strategy of using human bodies as building material, she wraps dancers in cloth singly or in pairs to create enormous cocoons that move in ways it seems impossible to attribute to human bodies.

The second half of Gezeiten takes a much darker turn, literally so: it begins with a fade to black and a truly frightening cacophonous din sustained for an unnervingly long time, it sounds as though the theater 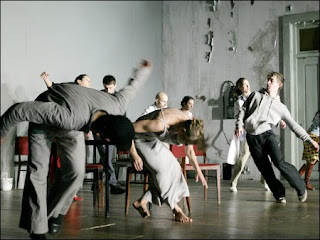 building itself is collapsing. And soon the dancers are seen running around in what appears to be a sort of war or catastrophe situation. We see a pantomime of ostracism, as one dancer is expelled from the group

and then harassed, and soon panic grips the stage as a graveyard of precariously balanced brick crosses topples and smoke pours in through doors in the stage set, floorboards detach and commence an unnerving clattering that underlies the action that follows. Shouts in many languages fill the air as the dancers use their voices as well as their bodies to beat back the chaos they themselves are producing. Waltz’s vision here is theatrical, and yet her attention to the vocabulary of repeated motion is sustained even during the production’s most “dramatic” sequences. Again and again she fills the stage with dancers artfully staggering as though the floor were shifting beneath them—shifting differently for each of them, it seems, for they are both together and alone in their distress.

motifs from several recent productions and featuring the orchestral work Arcana by Edgar Varèse, will premiere next week at the Haus der Berliner Festspiele.