So much has changed in Berlin over the past two decades, and so much remains the same. For those who have known the city for many years, its history seems to be written into it like a palimpsest, with its new buildings, streets and stories layered on top of older ones rather than replacing them. This is a view of the city as experienced from the point of view of the East, which is how I first got to know it. My love affair with the city began two years after the Berlin Wall fell—though “fell” is not the right verb to express what happened that night in November 1989. The Wall was not toppled, it was permeated from East to West (having always been permeable in the opposite direction). Those first years of what people called either “unification” or “reunification” depending on their political sensibilities were marked by a sort of bleak euphoria in East Berlin. Euphoria because of the sudden lifting of restrictions, the limitations on what you might be allowed to study, buy or read, or where you might be allowed to travel. Bleak because all of this was tempered by new economic realities. East German bank accounts were cut in half in the conversion to the West German deutschmark. In the cataclysmic transition of East German society from socialism to capitalism, more than half the people who had jobs lost them, and it soon became clear that economic survival would be predicated on the ability to function in the West German system. Since virtually all the GDR’s industry had been state-owned, the collapse of the government meant massive shut-downs of factories, laboratories and businesses. Many teachers were declared unfit to practice their profession because of what now looked like an ideological slant in their training, and many recent university graduates found themselves having to return to school for additional studies before their degrees could be recognized. Some adapted and thrived, others struggled.

It soon became clear that the financially as well as politically dominant West Germany would determine which aspects of “Eastness” would remain and which would be erased. In the early 1990s, one often saw the graffiti “BRD + DDR = BRD”: the FRG (Federal Republic of Germany, a.k.a. West Germany) + the GDR (German Democratic Republic, a.k.a. East Germany) = FRG. The value of the DDR, the Deutsche Demokratische Republik, was being calculated as zero. In response, a backlash of nostalgia (or “Ostalgie”—from “Ost”=East) arose in the entire Eastern part of the country, particularly in East Berlin where the border was generally just a neighborhood or two away. This wasn’t nostalgia for those parts of life that the tourists now swarming into the city were charmed by. Where tourists saw street after street of gray façades with their plaster crumbling away to expose the brick and were reminded of streets in black-and-white movies, locals saw neglect and discomfort: it was difficult to keep buildings with damaged walls warm during long, cold Berlin winters. No, the nostalgia was for a way of life that had developed over a period of forty years and, the political unfreedoms notwithstanding, had involved things like the availability of a job of some sort for virtually every citizen, readily accessible childcare and healthcare, and a spirit of camaraderie and innovation in everyday life that derived from the shortage of certain resources. A limited range of clothing was available for purchase, and so women made their own. Many people could not get telephones, so friends dropped by to visit each other often to keep up to date on what was going on in others’ lives. I don’t think anyone who lived in the East would seriously have wished for a return to that system at any point after 1989, but many chafed against the apparent assumption that everything about life in the East had been shabby, substandard or misguided. For many, the glass had been half full.

It is difficult, walking through the streets of New Berlin, not to be constantly reminded of aspects of the city that were effaced bit by bit as the West gradually took hold in the East. It wasn’t so long ago that when you got out of the subway at Potsdamer Platz 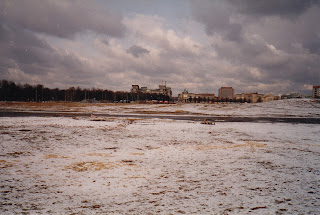 you found yourself in an enormous field of scrubby grass and biting wind with no buildings anywhere except for the ruins of an old hotel and the knowledge that Hitler’s final bunker had been under that grass somewhere. Now Potsdamer Platz is an architectural playground. Even more recently, the Palast der Republik (Palace of the Republic) was torn down after years of debate —an eyesore of Eastern Bloc architecture with a bronze-colored glass façade planted right smack in the middle of all the fancy Schinkel buildings up and down Unter den Linden, state buildings signifying money and power. The Palast der Republik was hideous, but it embodied an important part of Berlin’s history, and its demolition was regrettable.

Other elisions are far more modest. I cannot walk down Torstrasse in Mitte without remembering when it used to be called Wilhelm Pieck-Strasse after the first president of the GDR and those strange transitional months in 1994 when the street was marked by a pair of signs: one with Pieck’s name struck through with a red diagonal line, and one bearing the street’s old new name, Torstrasse, meaning “Gate Street”—presumably because in centuries past this street had led to one of the old city gates. The same holds true of Clara Zetkin-Strasse, which used to run between the back of the Humboldt-Universität and the Reichstag. Zetkin, a friend of Rosa Luxemburg’s, represented the German Communist Party in parliament for thirteen years during the Weimar Republic. Now the street is again called Dorotheenstrasse, the one remaining monument to Clara Zetkin the shop “Copy Clara” where you can have your xeroxing needs attended to.

The Berlin Wall has now vanished in most spots, replaced by a double row of bricks set into the ground to mark the line it carved into this city’s skin. It's as if it was simply displaced from above the ground to below. The demarcation persists in memory, while the Wall itself is now buried beneath the massive weight of all the new stories written into the space where it once stood.
Posted by Susan Bernofsky at 2:08 PM

In 1994 I lived in the Clara Zetkin Student Residence out in Köpenick. Previously a Hitler Youth centre I believe, it had been turned into accommodation for foreign students, who were kept as isolated from East German students as possible to prevent any more leaching due to cross-border love affairs and the like.
It was a strange time and we were a strange mix of people from all over the world, fearful of the Nazis and football hooligans who were the only people ever to raise their voices in Köpenick. After several months we all had to move out as the building had been returned to its pre-GDR owners. We were redistributed to other, mixed student residences around the East of the city, in one of which my former neighbour Pascale from Guinea Bissau was beaten up on a corridor. Around that time a white British friend was beaten up on the street in Friedrichshain after saying goodbye to someone in English.
I'm not sure whether the violence of those days has ebbed away or I just no longer come into contact with it.

Thank you for this.

I recently spent some time trying to organise my thoughts on why Berlin feels like the most consequential and future-oriented city in Europe. I would welcome your reactions to it. It's here: