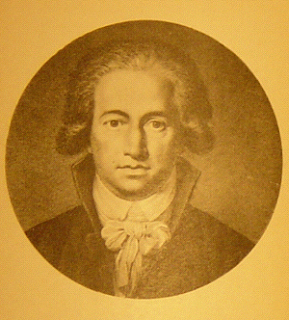 I happen to be spending the month in Marfa, Texas, a town said to be named after a minor character in The Brothers Karamazov, and in my borrowed house (thank you, Lannan Foundation!) I find a six-volume edition of Goethe’s works published in Berlin in 1949. This hardback edition, printed on cheap paper that is already turning brown and crumbling, is an early product of the newly founded post-war publishing house Aufbau-Verlag, which was eventually to become the largest and most influential publisher of literature in East Germany. The publishing house (whose name translates as “building” as in “rebuilding”) continued to play a prominent role in the German literary scene after 1989, but went bankrupt earlier this year under circumstances whose complexity would require a blog entry of their own to report; it’s now been sold and will resume operations next week.

From its beginnings (and until 1989 at least) Aufbau was associated with a communist and then socialist worldview, having been a product of the Kulturbund zur demokratischen Erneuerung Deutschlands (Cultural association for the democratic 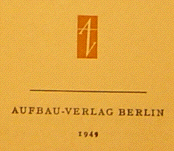 renewal of Germany) established in June 1945 by the Soviet Military Administration. And so, amid the ruins of the bombed-out city of Berlin, the powers that had vanquished Germany now dictated that literary culture should be reborn there as part of the city’s and country’s new identity as a humanistic, democratic society. To this end, the Soviet military provided Aufbau with an operating budget as well as printing supplies, which by this time were difficult to come by.

Some of the first books published by Aufbau were written by authors who been forced to flee Nazi Germany, including Ernst Bloch, Bertolt Brecht, Alfred Döblin, Oskar Maria Graf, Lion Feuchtwanger, Anna Seghers and Wieland Herzfelde. Readers were hungry for the literature of this new era. Seghers’s novel Das siebte Kreuz (The seventh cross) sold over 100,000 copies, and a book by Alexander Abusch about the wrong turn taken by German society sold 130,000.

The Goethe edition, Goethes Werke in Auswahl (selected works), printed in the old Fraktur typeface, edited by Paul Wiegler and with a moving foreword by Abusch, marked the 200th anniversary of Goethe’s birth. The Marfa copy bears the gift inscription "To his dear children on Christmas 1949. Their Papa"; did one of these children

eventually emigrate to Texas? Abusch’s foreword argues passionately for why Goethe was the author Germans urgently needed to be reading, because of the constitutive humanism of his work. The German middle class went astray in the middle of the 19th century, Abusch writes, becoming indentured to a capitalism whose logical consequence was imperialism. Goethe’s “Edel sei der Mensch, hilfreich und gut” (Man should be noble, helpful and good) had given way to Nietzsche’s Herrenmoral (morality of the masters). The intent of the Volks-Goethe (Goethe for the people) collected in these volumes was to infuse the nascent German post-war society with a love not only for one’s neighbor, but also for foreigners and strangers—a love markedly lacking during the reign of National Socialism. It was time for Goethe’s Weltliteratur (world literature - a key concept in his work) to serve as a signpost for a new morality.
Posted by Susan Bernofsky at 11:46 PM No comments: