The Hamburger Bahnhof, a 19th century train station that has been brought back to life as Museum for Contemporary Art, is one of the most interesting places to see art in Berlin. Its permanent collection boasts rooms of beautiful work by Anselm Kiefer, Joseph Beuys, Cy Twombly, Robert Rauschenberg, Donald Judd and Andy Warhol, and its temporary exhibits tend to be memorable. The floor of the main hall of the museum houses two large sculptures by Kiefer, one a patchwork airplane made of lead sheets with large sprigs of dried poppy pods fastened atop its wings (the title “Mohn und Gedächtnis” [Poppy and Memory] is taken from Paul Celan); the other, Volkszählung (Census) takes the shape of an enormous freestanding library, some fifteen feet tall, 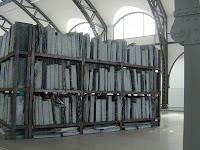 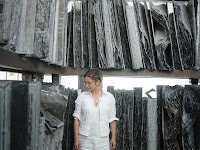 whose huge books, made of lead, are pocked with hundreds of dried peas in reference to the bean counters (“Erbsenzähler”) responsible for the project of counting human beings that reduces them to numbers and thus, in Kiefer’s universe, makes them readily dispensible. The lead library is huge, you feel tiny standing amid its weighty volumes.
Currently the Hamburger Bahnhof is showing the work of a fascinating young sculptor who lives in Berlin, Alicja Kwade (born in Poland in 1979), winner of the 2008 Piepenbrock Förderpreis für Skulptur. Kwade specializes in turning ordinary materials and objects into beautiful, precious images. Her show features several “precious stones” made of non-precious materials, such as an outsized “diamond” made of coal which, the label informs us, dates back over 300,000,000 years; after all, diamonds are made of carbon too. A huge stone 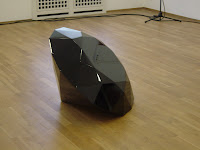 diamond the size of an armchair fills the center of a space at the far end of the exhibition defined by a quartet of speakers endlessly playing what sound like engagement scenes from a medley of movies. And she has also created a work called “Berliner Bordsteinjuwelen” (Berlin Curbside Jewels), an assortment of 100 stones found on the Berlin streets that have been polished and cut to resemble gemstones.
One of my favorite pieces in the show is a cone-shaped heap of what appears to be sand on the floor ornamented with some green sprinkles and crushed dried flowers. The cone shape mirrors the shape of the cut "gemstones" found elsewhere in the show; it's like a diamond buried in the floor. The work’s label, which 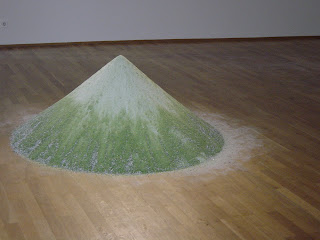 offers the title “412 Empty Liters Until the Start,” also provides the surprising information that the work is made of 555 kilograms of champagne bottles including the labels. So on the one hand this work is made of valuable material (champagne); but wait, no, it's just the empty bottles; but then the green sprinkles atop the sand sparkle like precious stones; and what happened to all that champagne anyhow?
The show also features a reflective silver tray lying shattered on the ground as if it were a mirror, and several mysterious 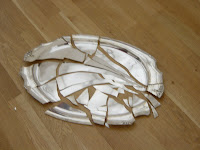 clocks, including a sort of cuckoo clock with a convex mirror where its face should be and a series of audibly clicking antique clocks covered with mirroring metal with doors obscuring their faces, lined up like a row of toasters.
Kwade has made another punning piece out of coal, playing on the fact that “Kohle” is German slang for money: She covered a set of 666 coal briquettes with gold leaf and stacked them up like bars of gold. Of course, coal too can be precious, especially if one lives in an apartment in which a coal-burning stove is the 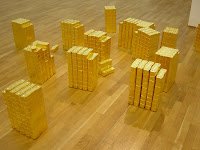 only source of heat (there were still lots of these left in East Berlin in particular as recently as 15 years ago, though they are becoming increasingly rare); burning gold bars would hardly keep one warm in winter.
My favorite piece in the show, “Hier und dort blind und machtlos (Parallelwelt 1)” (here and there blind and powerless [parallel world 1]), consists of a row of eight 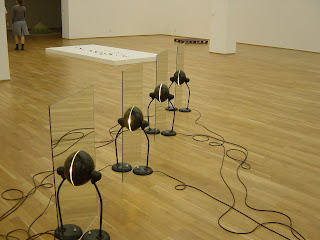 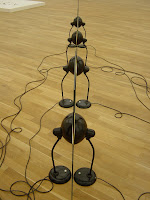 desk lamps arranged two by two with double-sided mirrors between them. No matter what angle you look from, you have the illusion that you are seeing the lamp furthest from you through transparent glass. The light from the lamps appears to be a sphere of light trapped between the two lamp shades as if between the halves of a bivalve’s shell. The project is beautifully simple, and yet oddly mysterious.
Posted by Susan Bernofsky at 8:01 PM

Census sounds neat even without the peas, though I realize they are a large part of the point. The cuckoo with a convex face also sounds intriguing. So this visit is why you were referencing Warhol for hair dye!