Robert Wilson does The Threepenny Opera 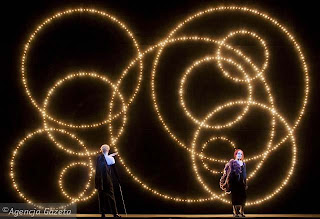 When Robert Wilson stages a play, you immediately know it’s him: harsh lighting, garish colors, fairgrounds sensibility. As often as not, his characters wind up looking like sideshow freaks; this approach can fall flat, but sometimes it shows us something about a play we hadn’t before noticed, as was the case with his 2000 staging of Georg Büchner’s Woyzeck with the Betty Nansen Theater of Copenhagen, which traveled first to the Berliner Ensemble and

then internationally, including a stop at BAM. The production also features a stunning original soundtrack of songs by Tom Waits and Kathleen Brennan. Certainly it was obvious all along that Büchner’s play was showing us how society and its villainous forces (in this case, amoral scientific experimentation and a concupiscent, 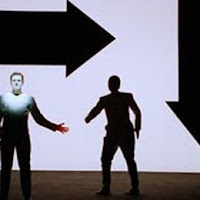 power-drunk military) can push a fragile soul over the edge. But Wilson’s flashy, Broadway-lit production really brought this point home, even more so than Werner Herzog’s film, in which Klaus Kinski’s deranged portrait of the title character emphasized his own personal grappling with demons. One is all about interiority; the other, internalization. Herzog’s Woyzeck is a muttering, murderous nut; in Wilson’s version, it’s our fault he’s that way.

Now Wilson has taken on Bertolt Brecht’s signature musical The Threepenny Opera, and has done so at the very same theater which premiered Brecht’s own production of the play in 1928. Until Christmas 1995, the Berliner Ensemble was known as the artistic home of Heiner Müller, who staged many memorable productions there, including many Brecht plays; since 1999 it has been run by Claus Peymann, formerly of Vienna’s Burgtheater, who operates in a quite different theatrical tradition (his signature playwright is Thomas Bernhard). So when Wilson stages a play at the BE, it marks a temporary return to the theater’s traditional Brechtian-Müllerian mode.

What does Wilson do with Brecht? For one thing, his heavily powdered and painted characters all wind up looking like creatures straight out of Otto Dix, an effect heightened by the fact that the lighting often makes them look two-dimensional—the final scene winds up looking like a diorama of faces cut out of news- papers. (This photo courtesy of Colya Kärcher.) Many also wear costumes that give them distinctive silhouettes (Mrs. Peachum’s heavy hip padding, Polly’s triangular dress), and are performed according to the principles of Brecht’s gestic theater, with exaggerated gestures indicating emotion rather than expressing felt emotion. When Mrs. Peachum is supposed to look astonished, actress Traute Hoess opens her lipsticked mouth into an enormous O and frames it with hands splayed to either side. Christina Drechsler’s Polly, the dopey bride of gangster Macheath, speaks in a mincing little-girl voice punctuated by a silly little “boo!” Mac himself 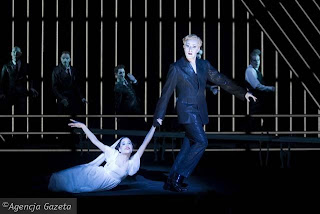 (Stefan Kurt) is oddly androgynous with his lipstick, lacquered hair and the corset beneath his suit jacket—he winds up looking like a cross between Marlene Dietrich and Joel Gray as the Emcee in Cabaret, a fair-enough point of reference (as is Otto Dix) for this late-Weimar play. The only character whose interpretation flat-out confused me is Jürgen Holtz’s Peachum, whom Wilson has dressed up with a stoop and yarmulke as a caricature of the money-grubbing Jewish merchant (like the pawnbroker who sells Woyzeck his knife). Certainly this is a stock comic character that would have gotten a laugh in Brecht’s own time, but in a post-WWII cultural context it jars. Perhaps Wilson means to draw our attention to the way in which socially acceptable stereotypes like these, even among the left, both in Germany and elsewhere, helped pave the way for the ascendance of National Socialism. If so, it’s a valid point, but since the production signals it with only a single costume choice and provides no specific point of view from which this figure is being perceived, it's hard to see exactly what Wilson is looking to achieve here.

In the world of Die Dreigroschenoper, you never get away from “It’s the economy, stupid!” The opening scene in Peachum’s shop is regularly punctuated by the cartoon sound effect of jangling coins which is repeated throughout the play, even in odd contexts, as when the jailor Macheath’s just bribed not to handcuff him drops the rope signifying the cuffs. Money is shown to be the principal motivation for most of the characters in the play, with the notable exception of Polly, who, we're shown, is just a ninny.

In general, Wilson’s version of Brecht’s play is heavy on the ideas and light on emotion; this is certainly in keeping with Brecht’s own stated intentions, though we’ve since learned that his plays appear at their best when pure epic theater is cut with psychological complexity, as in Martin Wuttke’s brilliant portrayal of Arturo Ui under Heiner Müller’s direction. But at moments a bit of character psychology does in fact slip in, particularly in my favorite scene in this production, 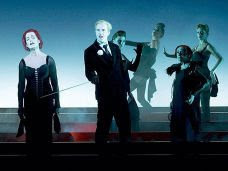 the moment of Mac’s return to the bordello after escaping from prison, where he sings the Zuhälterballade (Ballad of the Pimp) in a duet with Jenny, the whore who betrayed

him to the police, brilliantly played by Angela Winkler. While it’s clear in the context of the play she turned him in for the money, the song offers a psychological explanation (it details his abusive treatment of her under the guise of nostalgia), and Kurt and Winkler bring such depth of feeling to their performance of this powerful pas de deux that the play does start to feel as though it truly is about human beings—which goes a long way toward giving life to a production that exults in its own artifice.
Posted by Susan Bernofsky at 2:23 PM 3 comments: