Hamlet at the Schaubühne 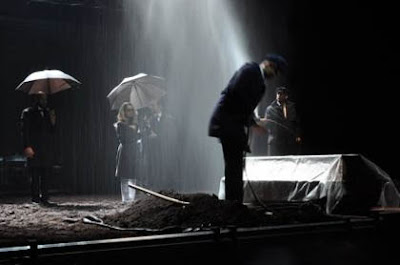 When it comes to the problem of how to stage lines so famous every schoolchild knows them by heart, Thomas Ostermeier’s new production of Hamlet at the Schaubühne Berlin takes the bull by the horns: “To be or not to be” (Sein oder Nicht-sein) are the first words spoken in the play. This is the same cut-to-the-money-shot strategy recently used as an opening gambit in Michael Thalheimer’s staging of Faust I for the Deutsches Theater, and it’s a good way to deal with the “classics angst” that has turned the staging of these key plays in the repertoire into daredevil variations in search of the ultimate trump. Ostermaier’s Hamlet, though, does turn out to be rather trump-filled, particularly during the first hour of the performance, which consists of one tour-de-force set piece after another. Afterward, the tension subsides somewhat, making for an evening that is good rather than great overall, but the six actors involved all turn out magnificent performances (particularly Lars Eidinger in the title role).

Ostermeier’s Hamlet relies heavily on the video-cam technique pioneered in Germany by Frank Castorf at the Volksbühne, but Ostermeier uses the camera quite differently. Whereas Castorf is interested in hidden spaces (the actors often perform in closed boxes on stage, their performance visible only by means of the live video feed projected on large screens onstage), 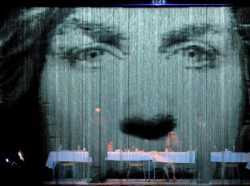 Ostermeier shows us the mechanisms by which people and things are made larger than life. He projects his images onto a curtain made of shiny gold chains while we simultaneously look through it to see the live action on the stage, which is set up with a long banquet table. Judith Rosmair wearing dark glasses as Gertrude looks like what she is: a woman in dark glasses; but the projected black-and-white video feed in which her hugely magnified face is grainily projected turns her into a starlet caught in the cross-hairs of the paparazzi. And so the play’s initial image of Hamlet reciting his famous monologue with his face blown up so large that just his eyes and nose fit on the screen appears a self-reflexive gesture, a comment on the hugeness of the lines themselves, which have become familiar enough to be emptied out of meaning. At climactic moments of the play, the live video feed is intercut with other images, with e.g. the image of a skull flickering in and out of the live footage of Hamlet’s face (perhaps in compensation for the fact that the Yorick scene has been omitted).

The meaning Ostermeier offers us as recompense comes in the form of dirt: the entire stage is covered in a thick layer of earth, and the first real scene of the play is a burial pantomime in which a frantic gravedigger scuffles about at cartoonish speed to get a coffin singlehandedly lowered into its grave (with lots of slapstick pratfalls) as the play’s main protagonists look on in the rain produced by a hose held aloft. The scene lasts a painfully long time and is stunningly expressive. The gravedigger starts shoveling in the dirt before remembering that the first handfuls belong to the mourners—whereupon he hops into the grave to scoop it all out again. When a languishing Gertrude drops the delicate little mourners’ trowel into the grave along with the bit of earth it holds, the gravedigger offers the other mourners a full-sized shovel instead. Characters keep returning to this dirt throughout the performance, though not in the food-fight way that would have likely ensued if it had been Christoph Marthaler doing the directing. Ostermeier’s dirt has a solemnity, a gravity to it. Characters don’t throw it around, they eat it (Hamlet in particular). The first metaphorical use of the dirt comes early on, when Claudius is chiding bereft Hamlet for his ostensibly untoward despondency after his father’s death: Claudius embraces his unresponsive nephew, and the instant he releases him, 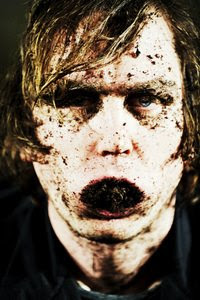 Hamlet topples like a felled tree, face-first into the pile of dirt covering his father’s grave. This descent into dirt is what Ostermeier keeps bringing us back to—the reality of death and loss—and compared to this Claudius’s politic speech is just wind blowing by.

The actors in this production spend a lot of time face-down in things, mostly food, and generally when they show their faces afterward, they look like ghouls arisen from the dead. This Denmark is a ghost town. And although Hamlet tells Horatio (and us) quite clearly that he’s planning to feign madness, it’s hard to see this madness as make-believe. Eidinger’s performance is full of Tourette’s-like verbal tics and is utterly unsettling. When he strips down to act out the play The Mousetrap for king and queen—Hamlet and Horatio are the only performers in this staging—we see that the doughiness of his body is due to the fact that he’s wearing a heavily padded undergarment beneath his clothes. After playing the role of the queen wearing only black lace panties and thigh-high stockings, he climbs back into his fat-boy suit, asking one of the other actors to zip him up. One of the strongest scenes in the entire production is the pas de deux between Hamlet and Ophelia when Polonius forces their encounter. The scene shifts back and forth so quickly between tenderness and violence it’s truly frightening, and eventually he half-buries her.

Toward the middle of the play the pace starts to slow down, and I found myself wondering, as I watched Claudius (brilliantly played by Urs Jucker) contemplating aloud the vileness of his own fratricide, whether this entire scene couldn’t have been cut outright 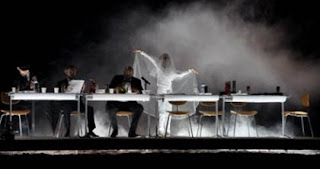 with no great loss of effect. Ostermeier has created an action-packed Hamlet in which psychological processes are so effectively translated into physical ones that the actual recitation of monologues seems almost irrelevant. Cutting out a startlingly large number of scenes is a strategy that worked beautifully for Ostermeier in his staging of A Midsummer Night’s Dream in 2006 (a co-production with choreographer Constanza Macras), and he would have done well to trim Shakespeare’s play more rigorously this time as well. Though two and a half hours is not at all long for a performance of Hamlet, given the density and compression of this staging, making it leaner by half an hour would have served the production well.
Posted by Susan Bernofsky at 9:18 AM

Thank you for this. Hamlet in 2.5 hours is very short indeed; the uncut text runs to over 4, so cutting is usually where the directorial process starts.

I look forward to seeing this when it passes through Sydney in January.