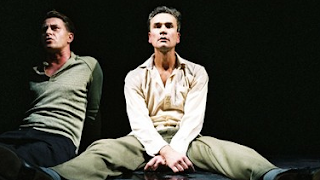 Theater director Michael Thalheimer of Berlin’s Deutsches Theater seems to have found his niche over the past decade: he specializes in plays about the degradation, abuse and abandonment of women. It’s a great subject. His brilliant staging of Lessing’s Emilia Galotti (2001) depicted the life of this young woman—which is systematically destroyed by a pair of hit men: a powerful prince who has the hots for her, and her father—as a triangular cage. Wedekind’s Lulu in Thalheimer's 2004 production, which came to BAM in 2007, was rife with sexual violence performed before the blank screen of a wall in the middle of the stage (see fellow director David Levine's interview with Thalheimer). And now his Faust, Part I—currently showing as part of the Berliner Festspiele—whittles down Goethe’s complex tale of Faust’s search for knowledge and earthly pleasures to his bid to get into the pants of dour schoolgirl Margarete. Mephistopheles plays the pimp, and by the end of the play little Grete is left a bloody mess, her mouth a big red smear, her eyes all bruise.

Not that the play’s considerable metaphysical freight is left by the wayside. Thalheimer is a great lover of words, and most of the play is packed with Faust-Mephisto dialogues on everything under the sun. Actors under Thalheimer’s direction, regardless of the play in question, tend to develop a palette of verbal mannerisms, you can’t help thinking of them performing their texts much as musicians perform. Tempos change, voices are pitched high or so low they almost disintegrate (in the case of Sven Lehmann’s Mephisto) into pure resonance. And the story does still focus on Faust’s quest to grasp and master the universe of worldly life. In love with Grete, he may be above all in love with the idea of exercising his will by possessing the object of his desires. Grete in this staging stands in for everything Faust hopes to grasp.

The play begins in silence: the house lights suddenly go out, and the stage lights up, showing us Faust in profile (played by Ingo Hülsmann). He stands there immobile for an unnervingly long time, the only sound the faint grating noise produced by the revolving stage behind him whose circular wall of wide black slats as high as the stage itself continues to move inexorably clockwise throughout the first part of the play as Faust is joined by Mephistopheles and their conversations begin. Eventually lights appear backstage, illuminating the space between the vertical

slats and soon blinding the audience at every interstice. After an extended period of constant noise and light, it comes as a relief when a gap finally appears in the slats, baring most of the stage and revealing Grete’s tiny metal bed standing alone at the center, beneath a big luminous cross mysteriously created by the alignment of the slats. This brief interlude of respite (during which Grete, played by Regine Zimmermann, speaks of happiness and peace) is the one upbeat moment amidst the dreariness. Soon enough Faust has entered Grete’s life and she sits on her bed (in left-facing profile like Faust before her) reeling off the verses of the famous song “Grete at the Spinning Wheel,” in which she repeats over and over the words “Meine Ruhe ist hin,” (my peace is gone). There’s no spinning wheel on stage; none is needed; all its symbolic weight is already carried by the black revolving barrel of the stage (literally a wheel, spinning) that’s grated on our nerves for the play’s first half, eventually making this viewer woozy.

The repetition theme reaches its climax when Margarete asks Faust whether he believes in God. Unwilling to answer yes or no, he engages in a long beating-about-the-bush speech that is as exasperating to us as it must to poor Grete. By this point Faust’s use of discourse has come to appear the opposite of kindness and truth. Unhappy with his response, she asks him 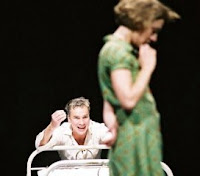 again, and he repeats the monologue verbatim, with different gestures. Is he really repeating all this garbage? She asks again, and he repeats his response—six times in all. Eventually she gives in, having at last heard enough. And the slats of the background shift enough to set the cross askew.

My favorite part of the production is the stunning performance of Mephisto by Sven Lehmann, who turns the devil into a plump lascivious boor who lifts his sweater to scratch his belly and pantomimes the most astonishing little onanistic dances: prodigiously lecherous cavorting. He appears to be the only character in the play who’s having any fun. Even Faust, his desires quenched, is kept busy learning the lesson that fulfilled desire just gives way to other itches that require scratching.

At times the production’s insistence on monotony produces boredom, and for this reason I find the staging finally less successful than, say, that of Emilia Galotti, which proceeds at a well-nigh military clip. This Faust does drag a bit, but it shows us a psychological, Nietzschean Faust that most certainly affirms (in case you had any doubts) the play’s place in the modern canon.
Posted by Susan Bernofsky at 5:42 PM