"House of Literature" has a vaguely Eastern Bloc ring to it, but in fact "literature houses" are an important part of the cultural landscape throughout Germany and particularly Berlin, which wound up with three of them after unification and now has four. So what is a Literaturhaus? Generally it's a staffed building devoted to literature, offering a regular reading series (or a number of them) that is open to the public, and it usually offers other sorts of services as well: many Literaturhäuser host writers-in-residence, some house the editorial offices of literary magazines, some administer literary prizes, and some even have cafés.

Here's a rundown of the Literaturhäuser currently to be found in Berlin:

1. The LCB (Literarisches Colloquium Berlin), is located in the Wannsee district on the shores of the lake of that name, just down the block from the American Academy in Berlin. The LCB is housed in an elegant old 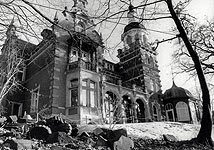 lakeside villa with a beautifully tiled "winter garden" terrace from which one can admire the view down the steeply sloping back gardens down to the lake. It was founded in 1963 by the late Walter Höllerer, whose wife, portrait photographer Renate von Mangold, still photographs visiting authors, making for an impressive display in the downstairs rooms. A large auditorium room is the site of several public readings per week (including the occasional one in English), and a number of radio shows on literature are recorded here, usually before an audience. A small bar dispenses wine, beer and juice after readings. The LCB also hosts several workshop series for young authors and for literary translators (translating both into and out of German), and regularly houses a half dozen writers in residence at a time. Its staff publishes the literary magazine Sprache im technischen Zeitalter (language in the age of technology). The LCB is located at Am Sandwerder 5, a short walk from the Wannsee S-bahn station. Don't miss their garden parties!

2. The Literaturhaus Berlin, much loved for its great cafe, is located at Fasanenstrasse 23 in Charlottenburg just off the Kurfürstendamm. It was founded in 1986 and features the most active 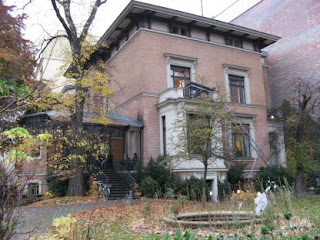 programming of any of the Berlin literature houses, often offering a different reading every night of the week. The Literaturhaus also houses a gallery space in which it frequently hosts literature-themed exhibitions, some of which are prepared in conjunction with the German Literature Archive in Marbach. Its bookstore Kohlhaas & Company (named after the title character of a great Kleist story) specializes in quality literature, including titles commissioned by the Literaturhaus for publication in its own series.

3. The literaturWERKstatt berlin was founded in 1991 and initially housed in the building that was formerly the site of the Literaturhaus Pankow am Majakowskiring in the Pankow district of East Berlin. Like many East German cultural institutions, the Literaturhaus Pankow was derailed by the loss of its GDR government funding after 1989, but the new literaturWERKstatt soon became an established part of the city's literary scene.

The name literaturWERKstatt is full of puns - Werk is a (literary) work, a Werkstatt is a workshop, and a Literaturwerk-Statt is a site (Statt or Stätte) where the/a work of literature is accomplished, with a pinch of irony thrown in, since the preposition "statt" also means "instead of," as in "literature instead of works." Right from the start, this Literaturhaus distinguished itself as a home for hip new cutting-edge work and innovation, a point driven home by its relocation, in 2004, to an über-hip site in the trendy Prenzlauer Berg neighborhood. The Kulturbrauerei (culture brewery) at Knaackstraße 97 really is a former brewery whose grounds have been renovated to house a number of cultural institutions. The literaturWERKstatt offers readings, contests, open mike events, poetry festivals and more. Of all the Literaturhäuser in Berlin, this is the one that best succeeds in creating a party atmosphere around literature to appeal to a younger audience.

4. The Literaturforum im Brecht-Haus is the smallest of the Berlin Literaturhäuser but still offers a varied program. It was established in 1992 in the apartment house at Chausseestrasse 125 in Berlin-Mitte where Bertolt Brecht 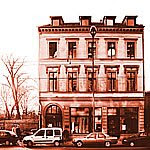 lived until his death in 1956 (he's buried in the cemetery next door); before 1989, the building had been known as the Brecht-Zentrum Berlin, institutionally supported by the GDR Ministry of Culture. In the early 1990s, the Literaturforum featured a program defined by its relevance to Brecht's work, but it's since branched out to offer a wide range of readings and screenings of contemporary literature and theater. The restaurant in the basement, with additional tables in the garden courtyard during the warmer months of the year, serves up Viennese specialities that are said to be based on the recipes of Brecht's second wife, legendary stage actress Helene Weigel.
Posted by Susan Bernofsky at 10:30 PM

This is great, so informative! Thanks for the histories of these places.